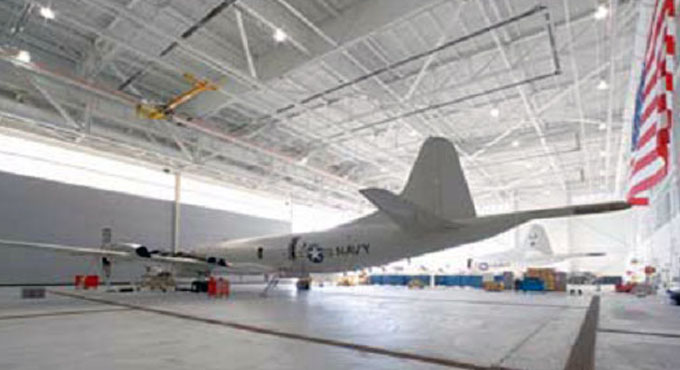 Sheridan Construction, functioning as a subcontractor to the JN Gray Company, was a member of the successful design/build team that was awarded a contract to design and construct this project for the Navy. Sheridan Construction teamed up with Butler Heavy Structures to provide the design, fabrication and erection of the steel superstructure for this 190,000-square-foot hangar.

The structure incorporated two door openings into the hangar that were 385 feet wide with a clear height of over 50 feet. This resulted in an overall building height of 80 feet to accommodate this opening. The most challenging aspect of the project was accommodating the requirements for the large door openings. The door openings were framed using box trusses that were 15 feet wide and 30 feet deep across the 385 foot span.

The design of these trusses was closely coordinated with Megadoor, who supplied the fabric doors. Deflection criteria was critical in assuring the proper operation of the doors. While the design of the door openings was a challenge, the erection of the box trusses was equally so. The box truss was constructed of individual wide flange members with most connections having upwards of 100 bolts. Each of the trusses were assembled in four sections on the ground and then lifted on to steel shoring towers that were erected on concrete foundations under the truss. Once the entire 500-ton truss was assembled atop the shoring towers, a hydraulic jacking system slowly lowered the entire truss until it supported its own weight.